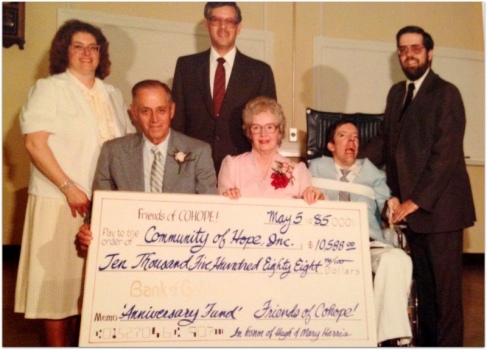 Mary sat on a couch in front of the fireplace in the COHOPE dayroom, a quilt wrapped around her shoulders.  Hymns emanating from a local radio station anchored the atmosphere with a calm sense of security.   It was Monday, Januay 21, 1985.

Outside the weather was bitter.  The coldest air mass in 86 years had the entire eastern third of the country in its grip.  Heeding weather forecasts, Hugh had spent the weekend making sure the water pipes under the building were protected, and the heating system working properly.  He had brought in extra firewood.  Mary and the cooks had made sure the pantry was stocked.  There was no storm associated with this air mass, just bitter, cold temperatures.

They had not picked up the day students because of the weather.  To conserve heat, they closed off the classrooms and everyone gathered in the dayroom.  The morning became a cozy time games, songs, stories, and “family” bonding.  After lunch, the students returned to their rooms for a rest period.  Some staff members left early.  Mary found it an ideal time for reminiscing.

Putting dfor own her Bible and journaling notebook, she leaned back and closed her eyes.  On days like this it seems like spring will never come.  She thought back to her childhood days on the dairy farm, and the warmth of the wood-burning stove in the kitchen of the old house, whose soul was rooted in the log cabin that had spawned it.

Mary’s thoughts turned to hers and Hugh’s fiftieth wedding anniversary coming up in May.  She remembered the vows they had wrapped around their lives standing before an elderly minister in her parents’ living room.  “I, Hugh, take you, Mary…I, Mary, take you, Hugh…for better, for worse, for richer, for poorer, in sickness and in health…until death….”

She wished she could whip out an album of wedding photos to remember everything, but there was none.  Why didn’t we think to have someone take pictures of the wedding? Dad Harris had a 16mm camera he loved to use…it doesn’t make sense.  I guess we were just in a hurry to get our lives going!

She thought about the journey she and Hugh had shared across these years.  We’ve had our share of both the better and the worse, she thought.  In the beginning, their resources were scarce, yet they felt like they owned the world.  Now we have so much to be thankful for…this place and the mission God has called us to fulfill.  Paying the bills had become stressful at times as they awaited influx of support.  It was humbling.  Thank you, Lord, for keeping us going!

Mary opened her eyes, got up and added a log to the fire, then fell back into her thoughts.  She felt especially thankful for the good health she and Hugh had experienced for five decades.  There had been a few glitches, to be sure.  She recalled the time Hugh had left early for a sales trip to North Carolina.  Suddenly he felt a pain so severe he had to stop the car.  It wouldn’t let up, so he turned around and drove back to Harrisonburg where he went directly to the emergency room at Rockingham Memorial Hospital.

She remembered the phone awakening her.  Picking up the receiver, she struggled to say something coherent.  The caller sounded urgent.

“Mary, this is Dr. Hearn.  I called to tell you Hubert is sick.  He has a kidney stone.”

Dr. Hearn,a friend as well as their doctor, was a supporter of COHOPE.  He performed surgery, and Hugh spent a couple of days in the hospital recuperating.  In recent years he’d developed some back trouble and had begun sleeping in a recliner chair instead of a bed.  There was no recliner in the room, and none available in the hospital.  True to form, he solved the problem…by having his own recliner brought in from home.

That’s Hugh!  No obstacle is too great…he always finds a solution.

Her mind drifted to her own hospitalization when Dr. Hearn sent her to the emergency room with dehydration.  It was about eleven o’clock at night, and they assigned her to a room that had been occupied by an unruly, intoxicated man.  He had kicked out the window before they subdued him, and removed him to another section of the hospital. Maintenance replaced the window temporarily with a sheet of cardboard taped to the frame, but it let in cold air.  Mary remembered receiving IV’s while huddled under blankets, trying to keep warm.  She shivered at the thought.  I think that’s the coldest I’ve ever been.

There had been some other hospital stays under much better conditions.  The causes included a hemorrhoidectomy, hysterectomy, and a abdominal tumor they thought was cancerous.  Surgery proved it was benign, but she spend several inpatient weeks while they searched for blood with platelets to match hers.  It was an ordeal!  She signed. Nothing, though, compared to what I’ve seen others experience.  Mary was stirred from her reverie by the sounds of people stirring about.  Rest time was over.

Such was one brief day in the midst of winter that soon morphed into spring.  In the background of that wintry day were preparations her family was making to create a special celebration for their mother and dad.  The anniversary would fall on a Sunday, so they planned a three-part celebration.

Finally May 5th rolled around.  The celebration began at Keezletown United Methodist Church.  All four of their family was there, including grandchildren.  Congregation members overflowed with joyful greetings.  They were in the sanctuary of the new church built some years earlier, after the merger of the two churches Mary had noticed the night she arrived in town.  The service was structured around the theme of marriage.

A retired pastor, and close friend of the Harrises, Reverend Frank Baker, was the guest speaker.   As he concluded his sermon he said, “Mary and Hugh have asked to renew their wedding vows this morning.  If there are other couples who would like to join them, please come to the altar rail.”

Many couples responded.  Mary and Hugh faced each other, joined hands, engaged each other’s eyes, then repeated the vows.  A warm flood of emotion surged through Mary’s body, finally moistening her eyes with tears of joy.  “I love you,” she whispered to Hugh.   Her words were caressed by the same from him.  All of the challenges, hardships, joys, and fulfillment they had known together were baptized afresh with God’s grace.

After the service, Mary and Hugh, along with their families and a few friends, drove into Harrisonburg where a special meal had been arranged at the Sheraton Hotel.  Following dinner, their four children presented them with a check for $10,588 they had raised to honor their parents.  It was made out to Community of Hope, Inc. to support the project in which their parents had invested so much of themselves.

Later that afternoon, a third piece of the celebration took place with a reception back at the church.  Friends joined family once again to express joy, appreciation, and encouragement.

At the close of the day, Mary and Hugh gave thanks to God for the sensitivity of their family and friends.  They dedicated the check to daily operating needs at COHOPE.  It was a time when financial needs pressed them every day.  Many factors contributed to this.

For one, they had been in operation for fifteen years, during which time laws had been passed to mainstream care for the handicapped in schools, and public accommodations.  Community awareness had progressed to the points where handicapped persons were no longer looked upon as strange, embarrassing, or frightening.  The dairyman’s daughter and her husband had been part of making that happen.

New terminology had emerged.  Their clients were no longer “handicapped, but “developmentally disabled.”–a more inclusive category.  The term effectively communicated who they were.  It also spawned changes in how the community perceived their purpose.  COHOPE was still held in high regard, perhaps higher than ever, but now they had more competition for financial support as new organizations with somewhat similar goals came into being.

To meet the urgent need for support, Hugh made fundraising a daily activity.  Retired now, he frequently drove around the community seeking contributions.  He went to community and church leaders, and often door-to-door.  When his parents died, he received an inheritance which he dedicated solely to Community of Hope.

From this perspective, the “Big Five-0” gift was a high moment for Mary and Hugh–just as renewing their commitment to each other at the altar was a high moment undergirding their life together, and their enduring faith and trust in God.